Anyone knows which bearing fits the 60561615 serpentine or v-ribbed belt idler pulley of the 24V cars? Preferably SKF, I'd be grateful for a quick response as I have to replace mine.
Top

I've found two possibilities, although not 100% confirmed:
Any thoughts?
Top

No, not yet. I think I'll have mine removed and I'll measure everything once the bearing will be pressed out.

The info above was all I could find on other forums, including AlfaBB. No definitive confirmation unfortunately.
Top

I pushed in this mention SKF bearing. But be aware that There are a lip on the pully you have to push back. This is importen or the pully can fall of.
Top

I have make me some new one. Here are the drawing.

Many thanks for your tips and the drawing!

I'll confirm once I replace the bearing in mine.
Top

One small problem with the pulley bearings though, there is a lip protecting the bearings from sliding out of the socket, it's pressed in onto the bearing ca. 1 mm. alfisty solved this by adding a slot for Seger's ring, which is very clever. I'm not sure if the original pulleys can be rolled up again after the bearing is replaced.

I'm investigating a couple of different options at the moment, but it would be nice to hear your comments if you have any experience with this.

I have replaced mine with new bearings, checked after 1000km and its OK, i think there isnt any chance they can slide out even without "lip"...

My QV needed a new pair of the V-belt pulleys but I could not find any new or aftermarket ones that would fit. Actually found a pair on an Alfa restoration site but not only prices are sky high but it is also impossible to complete the transaction outside of the US. Anyway, went through all the tip-offs in this thread and bought an aftermarket pair that matched the OEM parts number 60561615, but they turned out to be too small for the 164. Eventually after seeking help from Ajren and Hilko, I finally found a pair of aftermarket ones made by Gates T36008 to match Alfa 166's OEM No. 60602136. On arrival they look similar, black but made of metal, the three differences from the 164's are:
(a) the centre hole is 10 mm which is 2 mm larger than the 164's;
(b) the bearing is larger (which does not matter); and
(c) the rubber coupling is too thick (tall).

To overcome these issues, the mechanic
(c) found a thicker anchoring bolt that measures 10mm to match the opening on the bearing, without altering the original thread on the engine block,
(d) file down the rubber coupling to ensure good clearance when the belt is turning.

And a few days after all was done and the refurbished wheels fitted, I had a chance visiting a storeroom where a buddy helped me put away spare parts for my other cars. There I found a pair of brand new metal pulleys with bearings, made by HBC, which I bought from Taiwan many years ago and have totally forgotten about them. After so much trouble this find wasn't very pleasant but at least I now have a pair of pulleys available for desperate 164 QV24 owners at large. PM me if anyone wants them.

Now let us see the pictures.

This is the worn, factory original idler pulley. 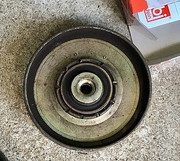 This is the wrongly bought aftermarket pulley made by Fabi Bilstein; information on the web is incorrect.

This is Gates Pulleys [Metal Pulley T36008 made in Canada, with Bearing 6006DWA18 made in China (modifications needed, read this thread)

Original and Gates pulleys placed side by side for comparison

I've ended up using the complete 2.0 TS / 156 pulleys (e.g. SKF VKM 32007). They are not metal, but some sort of hard plastic but look and work very well (a few years now). The only thing is the inner diameter of the center hole in the bearing (where the screw goes) is slightly larger, so I had to use some sleeves to mount the new pulleys correctly if I remember right (used a piece of matching diameter PVC pipe but any fitting sleeve or bush will work).

I don't remember exactly if I had to mount the 156 pulleys "upside down" due to some offset differences (was a long time ago but something rings a bell...) but in any case they do work