For the technical things.
Post Reply
7 posts • Page 1 of 1

The cam I need is the "front" cam, the one that drives the distributor.. is this the "Rght" (DS) cam? 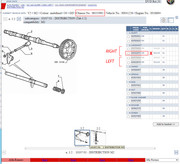 Thanks very much for that

No, right is the rear camshaft and left is the front camshaft - you can see that by turning the engine around as it would be RWD car and the distribution belt etc. would be in front of the car

..thanks MikeCZ, it's pretty bad that I can't tell my left from my right

But yes you're correct, and I was able to get 60602874 from the same supplier lukily, the same Ajusa part you mention. It looks like decent quality so fingers crossed..
Top

We all are still learning

Ajusa is not bad, but on engine I built when checked after some time it show a bit more wear then the OE cam I had on the other head (both were installed as new at the same time, so the same oil, same new tappets, etc.). Of course there could be other factors, like slightly different oil pressure in the head, etc., but although it was quite nice, it was not as nice as OE

But sometimes we have to take what's available

..for sure, the main thing is to keep them on the road as long as we can